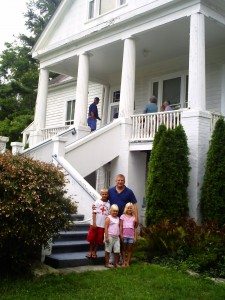 On August 2, 2009 on our way home from Myrtle Beach we stopped in Flat Rock, North Carolina to visit Carl Sandburg’s home known as Connemara. Most of the information below is taken from the brochure provided by the National Park Service U.S. Department of the Interior. The pictures are mine. The pictures of Sandburg are pictures I took of pictures. The text is what I present to my students in a PowerPoint with the pictures. I don’t know where I got the information, so there are no citations for the text. 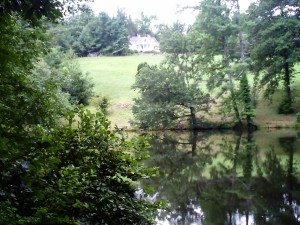 Sandburg once wrote, “It is necessary now and then for a man to go away by himself and experience loneliness; to sit on a rock in the forest and to ask of himself, ‘Who am I, and where have I been, and where am I going?’”

Carl Sandburg was already famous when he moved with his family to the Blue Ridge Mountains of western North Carolina in 1945. Poet, minstrel, lecturer, biographer, and Pulitzer Prize-winning author, he had spent his lifetime championing social justice and the American people through his writings and his singing. At 67, an age when many people retire, Sandburg was still actively working. 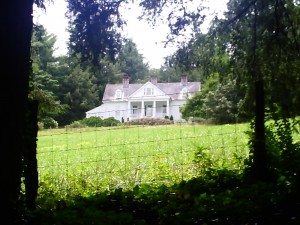 Sandburg’s wife Lilian had discovered the mountain farm named Connemara with their youngest daughter Helga. The farm had everything the family wanted, including a gentle climate and ample pasture for Mrs. Sandburg’s goat herd and seclusion for her husband’s writing. Carl Sandburg would call it home for 22 years. 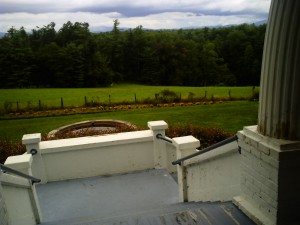 The estate had a long history – an ironic history for the biographer of Abraham Lincoln – for Christopher Memminger, who built the main residence around 1838, had served from 1861 to 1864 as Secretary of the Confederate Treasury. The second occupant, textile tycoon Ellison Smyth, named it Connemara to honor his Irish ancestry. Smyth’s heirs sold it to the Sandburgs, who moved from Michigan with their three daughters, two grandchildren, a library of over 14,000 volumes, and the Chikaming goat herd. 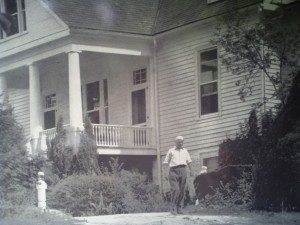 The years at Connemara were productive for Carl Sandburg. He published poems, children’s literature, fiction, and nonfiction. He continued to travel, lecture, sing, and earn accolades, including another Pulitzer Prize. 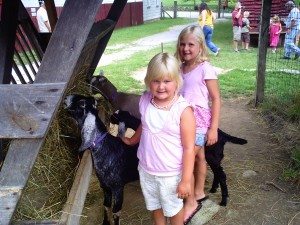 The family was busy too. Mrs. Sandburg bred her prize-winning goats and ran the farm business. (The goats in the pictures are decendents from those goats.) Margaret helped her father, attended to the library, and worked in her flower garden. Janet helped on the farm, which was especially active when Helga and her children, John Carl and Paula, lived here. Until her second marriage and move from Connemara, Helga managed the dairy operation with her mother. The grandchildren rode horses and played in the woods.

Mrs. Sandburg had a deep interest in goats and developed a prize-winning herd in Michigan, but the goat herd needed more room and a milder climate. Connemara was what Lilian Sandburg wanted – a place where her husband could write, and she could raise goats. 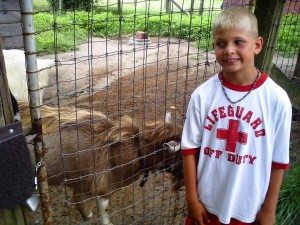 Lilian Sandburg bred champions. She earned world fame for her dairy goats and for her work improving the herd’s bloodlines and milk production. In 1952 the herd numbered over 200, and helpers milked 50 to 80 does twice a day. In 1960 top doe Jennifer II produced 5,750 pounds of milk, averaging 2.5 gallons a day. She became the all-breed American champion in milk production and the world Toggenburg Champion.

Today the goats at Connemara are related to Lilian Sandburg’s herd. they are Toggenburgs (tan and white), Saanens (all white), and Nubians (multi-colored with long, floppy ears). After a five-month gestation period, kids are born in the spring. Goat milk and cheese from Mrs. Sandburg’s farm were popular throughout the region. 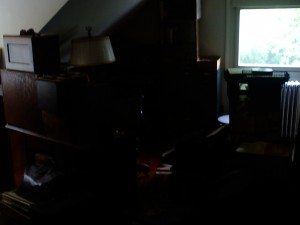 Above is a picture of Sandburg’s writing room. We weren’t allowed to use flash photography, so the picture didn’t turn out very well. This is where he wrote all night long. Sandburg kept late hours. He often worked most of the night, while it was quiet and still, and slept late in the morning. After a midday meal he read, answered letters, and wrote wherever his imagination took him – his upstairs office or study, living room, front porch, or on the large, sloping rock behind the house. The picture below is where he worked during the day when Margaret dictated his work. 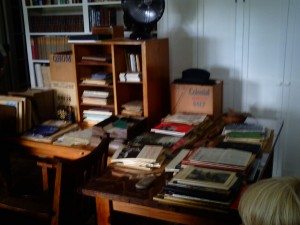 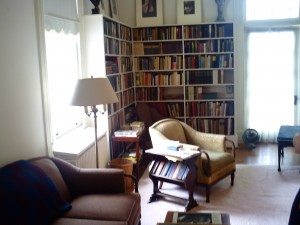 Dinner was a social gathering for the family. Afterward Sandburg would read aloud or sing with them. This picture is the living room. Off to the right where you can’t see is a piano and the guitar Sandburg would play while singing with the family. I couldn’t get a picture of the piano or guitar because of the other tourist in the way. 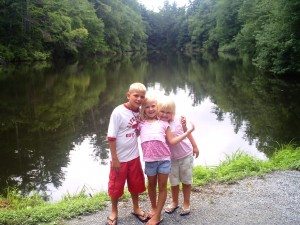 In the afternoon or evening, Sandburg walked with his wife, children, or grandchildren, or his friends on one of the winding paths or through the woods. The picture above is the pond at the bottom of the hill. 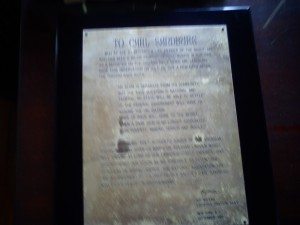 In 1965 Sandburg received honor from NAACP for his coverage of 1919 Chicago race riots and for his “life-long struggle to extend the frontiers of social justice.” Side note: out of all his awards, this is the only one he proudly displayed. I have a picture of it above. 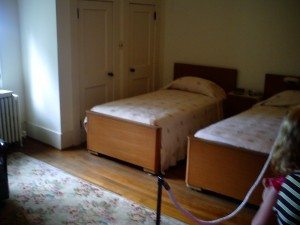 Sandburg died at home on July 22, 1967. He passed away in one of the beds above. He was too weak to go upstairs to his bedroom, so he spent his last weeks down here, surrounded by his family. 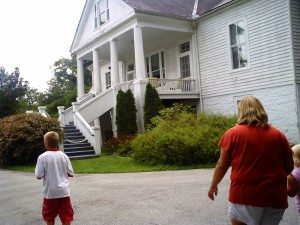 In 1968 the Sandburg family sold the property, donating the contents of the home to the National Park Service to be preserved as the Carl Sandburg Home National Historic Site. Always a voice for the American people, Carl Sandburg speaks to us still through his words, songs, and the beauty and serenity of Connemara. 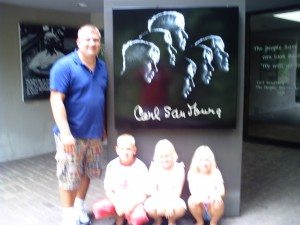