The Story Behind the Stories – A Touch of the Hand

The Story Behind the Stories – A Touch of the Hand 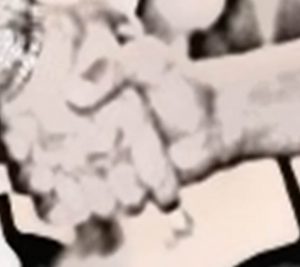 I wish I remember how I came up with “A Touch of the Hand,” but I honestly can’t. Was it based on a testimony someone gave in church? Quite possibly. I can even picture the lady who probably gave the testimony – if that is what really happened. The nursing home ministry at our church was very strong in the 90s and early 2000s. A large group of adults went every Sunday afternoon to the nursing home to sing hymns.

Singing hymns at the nursing home was something that I experienced as well when I was a teenager. One Wednesday night a month, our youth group would load up in the van and head up to the nursing home outside of Science Hill, Kentucky, where we sang with the residents. There was one resident in particular; her name was Shirley. She loved this singing time, and her favorite song was “I Fly Away,” so we sang it everytime we went. She eventually passed away, and the singings at the nursing home weren’t the same without her, but we carried on for the others.

Being a pastor’s kid, the nursing home was just a regular stop during vistation times, so I was no stranger to being at the nursing home nor being around the older generations. In fact, I wished I had taken more time to listen to their stories and get to know the world in which they once lived.

After I wrote the story, I sent it to The Gem, which at the time was a monthly take-home paper for adults with a circulation of 6,000 subscribers. The story was published on January 14, 2007. The Gem ranked as #9 on the 2007 Top 50 Christian Publishers List. Their tip for getting a story published was “to make the story interesting and Christian.” They were “most open to real-life experiences where you have clearly been led by God.” The biggest part of the publishing battle is knowing the market, and I knew I had a good fit for The Gem and they must have agreed.