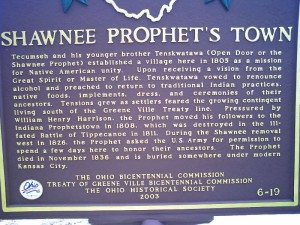 As I mentioned in my last post, we visited the site of Prophet Town at the Shawnee Nature Center. According to the Darke County Visitors Bureau, “this 118-acre preserve is the largest Darke County park.” There are “2 miles of trails that showcase the three distinct habitats of this park: woodlands, wetlands, and prairies.” 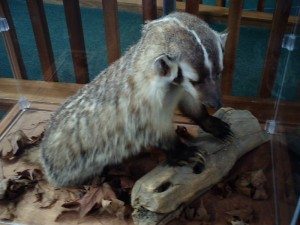 This park also has a Nature Center where Kaleb and Malarie were able to see real stuffed animals that are/were part of the western Ohio habitat. I took a picture of the badger because I’ve never seen a badger in real life and I’ve heard how mean they are. Just the claws on the thing would be enough for me to stay away. 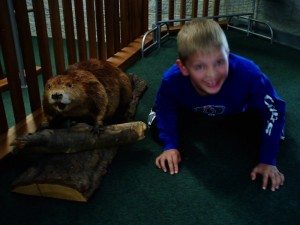 Also, Kaleb gave his best beaver imitation. There were also microscopes where the kids could look at bugs and other specimen from the area. I even took a look at a spider and a honeycomb. 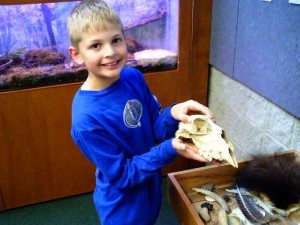 There was another spot where you could touch and examine bones, skulls, and antlers. It took some work to convince Kaleb to hold this skull for a picture. 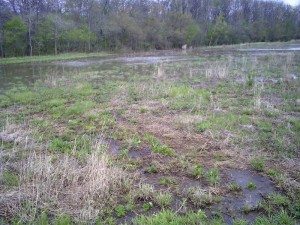 Western Ohio actually marks the beginning of the prairies that extend all of the way to the Rockies. This early part of the prairies was a slow transition from the eastern woodlands, so most of the time the land was swampy and very hard to homestead. Pioneers really had to battle the land to cut out fields and homes. One spot at the Shawnee Nature Center gave information about the plants and how because of the wet grounds, the plants had roots that dug very deep into the ground. So, as a homesteader, it would be very difficult to pull up and cut up those deep rooted plants. 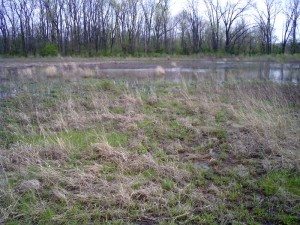 The pictures I’ve included show what this wetland would have looked like. It’s easy to look at this place and envision all of the animals that would have filled this area. I also see the homesteaders trying to tame this land and make it a place to raise a family and make a living in this new land of the free. 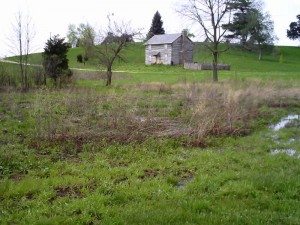 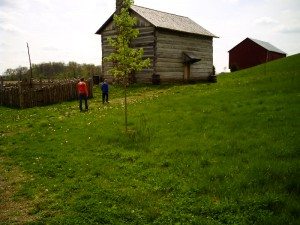 Also at the Shawnee Nature Center is a log cabin, much like what would have been here in the late 1700’s and early 1800’s. I even took a picture from the wetlands to show what kind of work the homesteader had in front of him. Learn more about farming/homesteading in Ohio.